Order before 22/12 and receive your gifts in time for Christmas.

What's Dandoy about the Helsons?

In our second entry of the Dandoy Diary, Clara, our content manager, speaks with Bernard Helson and his sons, Alexandre and Antoine, the 6th and 7th generations respectively of the family.

It's a sunny Thursday in Autumn and as usual, I'm running late. As I race down rue au Beurre, I spot Bernard Helson, the director of Maison Dandoy, and his two sons, Alexandre and Antoine, posing for the camera in front of their shop window. Behind the lens is Noémie, the life and soul behind Maison Dandoy’s social media, trying to capture them in their best light. I wouldn’t go as far as to say the three men are tense, but they do look slightly on edge posing in front of an unexpected audience. As it happens, there is an unusually large group of customers standing outside the shop today. More than there have been for a while since the end of lockdown. Perhaps this coincidence is a good sign. The three of them are having their photo taken today to publicly announce a big change at Maison Dandoy: after thirty-seven years, twenty-three of which were spent as company director, Bernard Helson is leaving the future of his family business in the hands of his two sons.

Not just another photo shoot 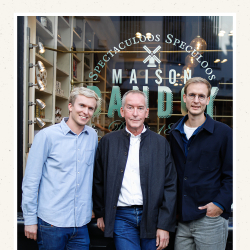 Apart from the fact that I'm always late, there's something else you should know about me: I have a theory on just about everything. One of these theories is that you can often guess someone’s hidden feelings, by observing them having their picture taken. Alexandre, the eldest son, looks confused by the exercise whereas Antoine smiles with all his teeth as if his life depends on it. Could their stiffness be related to capturing this definitive moment, after years of working alongside their father? As if reading my mind, Alexandre turns to me and explains: "The sun is blinding me". Bernard Helson, usually cautious and reserved, has a mischievous look about him today. When Noémie suggests to Antoine and Alexandre to relax ‘like their father’, Bernard Helson laughs and tells his sons: "You hear? You have to be more like me," and that amuses him to no end.

Once the photoshoot is over, we head upstairs to the office above the shop where Bernard Helson’s story began. He’s sitting at the wooden desk, where his father-in-law Jean Rombouts-Dandoy sat before him, and Jean’s father Valère Rombouts-Dandoy before that. I ask him how he feels about his departure from Maison Dandoy and he replies: "Strange, but not as strange as I thought". I nod knowingly, I'm also one of those people comforted to have imagined the worst. "I do get a bit nostalgic on gloomy mornings though,’ he admits, “something is missing." However, Bernard Helson is not a man short of activities. He’s barely been gone for a month, yet he still pops in on occasion to say hello, just in case the office and workshop staff were thinking about forgetting him. He may have left Maison Dandoy but he will continue to tell its story by writing a memoir. He explains to me with a smile that the memoir will need several volumes to contain all of the anecdotes he has accumulated over the years. If there is any publisher reading this...

Biscuits without the fuss 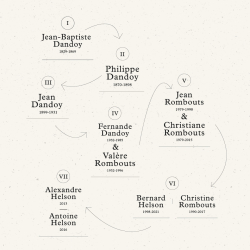 Bernard Helson joined the company in 1984 to work alongside his father-in-law. "He did everything all in one go,” Bernard’s eldest son, Alexandre, explains to me. “He met our mother, they got married, he started working in the workshop and then they had me". "No,” Bernard interjects, "you weren't there yet, you arrived in '86". When Bernard Helsons’s father-in-law Jean died in 1998, Bernard inherited the responsibility that he now entrusts to his sons. Of course as the generations shift, the times change and so does the role of a company director. Despite the evolution of the job and its challenges, Alexandre and Antoine’s desire remains the same as it always has been at Dandoy. They want to make biscuits with no fuss, in a wholesome and authentic way.

We want healthy growth for the company. We won't focus on improving the figures for the next quarter. We want to think long-term and give our children a legacy we can be proud of.

The three respective careers of Bernard and his sons (which each deserve an article of their own) have one thing in common: they all began with hands-on labour down in the workshop. The notion of starting in the workshop went without saying, it was just common sense. It would be unthinkable to represent the family business without knowing the biscuits crumb by crumb. This common sense is owed to the generations before them who lived through the war. They passed down three important lessons: don't throw anything away, if it’s not broken don’t fix it and concentrate on sustainable craftsmanship. Despite their former generation often being told they had missed the boat on industrialisation during the "Trente Glorieuses", their common sense and resourceful thinking paid off and served them well through these thirty years of post-war economic growth. With hindsight, we agree that this actually might be their greatest achievement.

This unwavering trait of remaining true to their ideals is seen everywhere at Maison Dandoy. There is a certain kindness to their professional and personal relationships, they’ve created a sense of well-being and family amongst staff. Of course I'm not suggesting that the Dandoy offices and workshop look anything like the innocent and gentle world of the Teletubbies. But they are people’s people and they aren’t afraid to acknowledge their weaknesses / admit their mistakes.

Working as a family

I ask what working together as a family is like and from reading between their words, I gather it hasn’t always been smooth sailing. It would seem that bearing the Dandoy name was previously of great importance. Alexandre and Antoine didn’t inherit the Dandoy name as their father, Bernard Helson, married into the Dandoy family - what we call a ‘pièce rapportée*’ in French. An ‘outsider’ if you like. To avoid repeating history, Alexandre and Antoine try not talking about work during family time or about family during work time. And they want everyone on level footing: “We're all pièce rapportée now. Everyone is part of the adventure in the same way. Even you!" Alexandre points to Noémie and me, as she takes a touching photo of Bernard Helson and Antoine, and I type up their words on my laptop. I admire Alexandre’s idealistic and dreamy personality, which Bernard Helson informs me he got from his grandfather Jean. He’s never sitting still at his desk but always on the move starting various projects.

(* une pièce rapportée in French is an expression which refers to people who enter the family by marriage. There is no faithful translation to English because it holds a slightly more negative connotation than “inlaws”.)

Two exact years separate Alexandre and Antoine. I couldn't help but share this perfect coincidence, which no longer seems to amaze the family. The two of them were born on exactly the same date, two years apart. We would have to check with their father, but at Maison Dandoy, two years is almost certainly a volume and a half of anecdotes and memories. Antoine and Alexandre share warm childhood memories themselves. They recall fondly the big pots the speculoos dough was made in. I conclude that Antoine and Alexandre paths likely fell into these speculoos pots off their own accord because, unlike previous generations, they were not pushed into it. 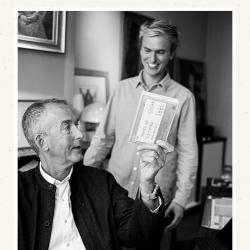 Our discussion is interspersed with anecdotes and digressions. Bernard is often overcome with a nostalgia that makes him rush in and out of the adjacent room, where their archives are stored. He comes back with the floppy disks of the very first computer he bought for the house in 1985. It looks similar to a VHS, taking me back to a time that anyone under 20 won’t relate to. He then returns with Fernande’s (his great-great-grandmother in-law) old personnel register on which he proudly shows us his registration number in 1984. "It's actually a trait that runs in the family,” Antoine remarks, “we’re incapable of throwing anything away.” It makes absolute sense to me that sustainable development is a running theme of the family business. 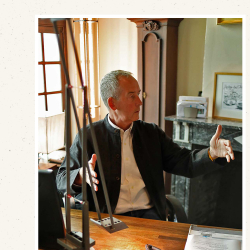 In a world full of uncertainties, a company like Maison Dandoy is a stable landmark, a beacon that lights up the path ahead.

Alexandre addresses this: "We want to keep this story that we grew up with alive and all the heritage that comes with it. We're not going to throw everything away, but we're committed to adapting to the world we live in. The fact that we've been around for almost two centuries shouldn't be an excuse to do ‘what we've always done’ under the pretext of preserving our traditions.”

Bernard’s grandfather, Valère, had always refused to throw anything away or make any changes. Not in his lifetime. When the moment presented itself, Bernard Helson took the plunge. After a family gathering in the early 2010s, he decided to entrust Base Design with the tricky task of refreshing the House's identity. Alexandre recalls: "Our father felt that it was necessary to move forward but I think he had no idea what he was getting into. At the first meeting, he told them that they couldn’t touch the logo nor the colours!’’. They all start laughing as Alexandre gently teases his father: “You do have a bit of Valère in you after all”. Alexandre has touched on something important : that we’ll never be fully aware of how much has been passed on to us or how much we’ll pass on to others. And that might just be why it’s so fascinating.